The Ghost Who Walks

The Phantom... The Ghost Who Walks

The story of the Phantom begins over 400 years ago when a young man and his father were exploring eastern waters. Their ship was attacked by evil Singh pirates, and the young man - the sole survivor - was washed up on a remote Bengali beach, half dead...

He was found by friendly natives, members of the Bandar tribe of pygmies. They carried him to the Deep Woods and nursed him back to health. Later, on the same beach, he found a dead pirate wearing his father clothes - his father's killer!

On the skull of his father's murder, he swore an oath - the oath of the skull! He became the first Phantom. Generations of Phantoms have followed, their secret never revealed. Jungle folk - with the exception of the Bandar tribe - thinking it was the same man, believed him immortal...

The legends of the Phantom are many. The Bandar, the pygmy poison people, call him "The Ghost Who Walks, Man Who Cannot Die". In the Orient, it is said: "Man who looks on Phantom's naked face will surely die a horrible death."

The real truth about him may never be known, except that he is good, clever, strong and brave. He and his ancestors have always fought on the side of good against evil.

The nemesis of evil-doers everywhere...ruler of the jungle... he works alone... The Phantom! 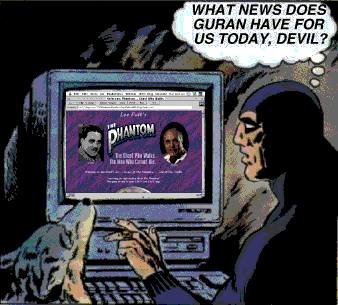 Yep we have The Phantom in purple. Read more at http://www.deepwoods.org/purple.html